Skip to content
Home
/
Three Stitches to Rule Them All

Three Stitches to Rule Them All 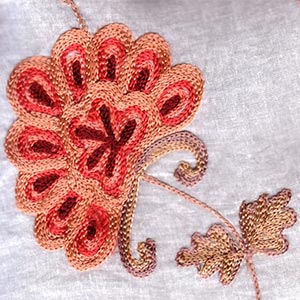 When it comes to embroidery, it looks pretty on the front but as always, the devil is in the details, it is all and always about the stitches that make up the entire design. In the most technical manner, machine embroidery is a lot more straight forward than personalized hand embroidery and does the same interlock stitch, however, its application and use within the field of embroidery digitizing is what makes this (seemingly) limited stitching technique, far more varied and differentiated.

It is prudent at this time to decipher between the types of stitches used by digitizers and what use each one has its own;

Starting with the most common type of stitch, it is, of course, Tatami or usually known as Fill stitch. As the name suggests, Fill stitches are usually used to fill large areas of the design, woven together like the Japanese Tatami mats themselves. The stitch itself lies quite flat on the fabric unlike the Satin stitch but with the use of the digitizing software, machines can be programmed to fill the areas at different angles, lengths, and directions which can lead to varying design appearances, patterns and add dimensions to the design.

The second most common type of machine embroidery stitch type is the Satin or Column stitch. It consists of zigzag stitches laid extremely close to each other, at varying lengths and angles to reach the desired effect. Satin stitching has a sort of sheen and far more defined style to it, which makes it stand out next to the other forms of stitching, hence is used commonly for Lettering and Outlining purposes. Still Satin stitching is limited in its stretch as after a certain width length, usually not more than 14mm of design area but dependent on the capability of the machine itself, Satin stitching has to be forgone in favor of the more versatile Tatami stitching.

The third common type of embroidery is the Running or Walking stitch. Running stitches consists of a single line of stitching, usually used for areas under 1mm. They are most often used to add minute details to the designs and sometimes used as outlines in place of the other stitches if the design calls for it. A derivative of Running stitch, known as Bean stitch is used for the outlining purposes often because it is thicker than the common Run as three stitches are placed between two points.

Another but highly important purpose it serves, is to be used as an underlay often which is a very important aspect of the embroidery in itself as although it is not seen in the final design, still serves as the foundation and stabilizer for the design while also enabling for the design’s minuscule details to be apparent as well.

These are the three basic forms of stitches in machine embroidery and actually, everything and more one should need to know about them so the statement saying, three stitches to rule them all, is not far-fetched at all.