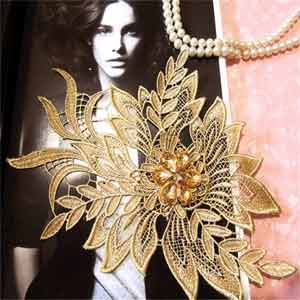 Fashion for Everyone and applique in Fashion, France is the country where modern fashion was born. With designers like Coco Chanel, Paul Iribe, and Jacques Doucet among many others, French fashion pioneered itself as being the ultimate when it comes to the art of dress making. Although the world has become a fashion oyster now, still the techniques and elements that started from the French sources are still as important as they were in France’s fashion domination (still is, but Italy and American fashion have become more mainstream), one such element being the appliques, now used the world over.

Applique, a French term of course, literally is translated into English as ‘applied’. Well, that is what applique is in a word, it is a sewing and embroidery technique in which a small piece of cloth, usually with design details (embroidered or otherwise) is attached, sewn, on to a larger piece of cloth either.

Applique is a rather open technique, although it refers to sewing something onto another garment, fashion designers use this technique in various ways to add dimension to their design, one main use has been adding embroidery designs. Embroidery is one of the staples of fashion and French fashion brought it to the fashion scene with their couture designs. American and London designers brought this to the more mainstream audience however embroidered clothes have always been expensive and only a few have ever been able to afford them. Masses wanted embroidery design elements in their garments and their need was somewhat appeased by the embroidery applique being available for retail around the world. People were able to attach these embroidery applique designs in their garments without having to get it done professionally which was and still is considerably expensive. These embroidery appliques are easy to apply and are available as both iron-on stickers, for those with no sewing experience, and sew-nos for those who are able to do so or have machines capable of performing that task.

Applique embroidery has become common for the times of today; nevertheless, it is constantly evolving like the world of fashion itself. Where most of these appliques were hand crafted, now are being created with the latest available technology of the digital embroidery. Applique machine embroidery designs are economically priced, hence even more affordable for the masses. Embroiderers in China and other such South Asian nations are the applique market leaders right now as they are not only providing the machine embroidery applique patches but also making the accessories to go with the patches, which is yet another craze for the fashion obsessed times of today.

For customized embroidery patches, digitizing or any digital embroidery needs, contact DigitEMB right away and be the fashion forward individual you always wanted to be.